The owners and managers of the "terraces" organize activities during the retreat aimed at the well-being of body and mind. Najla is a psychologist by training, with a long experience in the United States and Vietnam as a life-coach and Yoga therapist. Nabil is a neurosurgeon, he has just retired to devote himself to research and the debate of ideas, he teaches philosophy at the faculty of medicine and is preparing a thesis on evolutionary thought.
Abdelli terraces is a guest house with restaurant that stands out for its holistic vision.

Nestled at the top of a hill in the caza of Batroun, Abdelli Terraces overlooks a hilly landscape with picturesque villages and with the Mediterranean as a horizon.

Abdelli is a several hundred years old village. The population paid a heavy burden for its rebellious spirit against the Ottomans at the time of the first war. Along with all the neighboring villages it suffered from famine and high mortality as well as a mass exodus. With that the old village fell into disrepair, and the terraces shaped by generations of human labor crumbled.

During a hike, the owner, a neurosurgeon, fell in love with this abandoned and soulful site. He saw the possibility of realizing a dream that had haunted him for several years.

In contact with the human suffering expressed in his clinical practice through back pain, he found that more than half of his patients suffered from an existential malaise much more than an organic disease. His gaze shifted to the other dimension of man that he could not relieve with either his prescriptions or his scalpel. A stress management center was created, at his request, in the hospital alongside the back clinic. With the founder of this center, the idea came to life, outside the hospital environment, a space of nature, serenity and beauty to host a holistic activity that could be more effective in the management of discomfort. Come to this space to transform your life, to seek meaning in your existence, to live differently by disconnecting from the chaotic everyday life. This is the goal that the doctor and the life coach set for themselves.

The ruins that litter the hill have been restored, fitted out and enlarged. The old earthworks were rehabilitated allowing the planting of a vineyard and new olive trees were added to the pre-existing ones, which are several centuries old. A farm housing goats, sheep, chickens and ducks has been set up in the landscape, as has a vegetable garden.

Abdelli Terraces can thus accommodate stays making it possible to take advantage of this exceptional setting as well as local cuisine and the activities that take place in the estate or in the neighboring regions. The staff who have been hired for the operation of the estate are mainly made up of young students from neighboring villages. The cooks were village housewives who were given additional training to hone their already remarkable culinary skills. 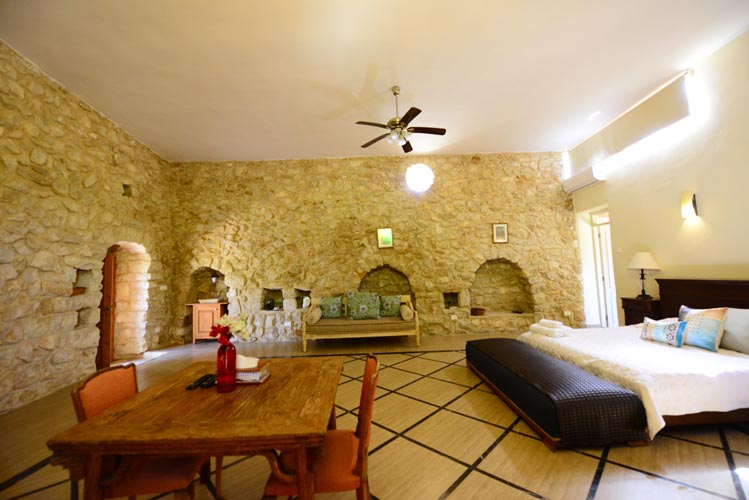